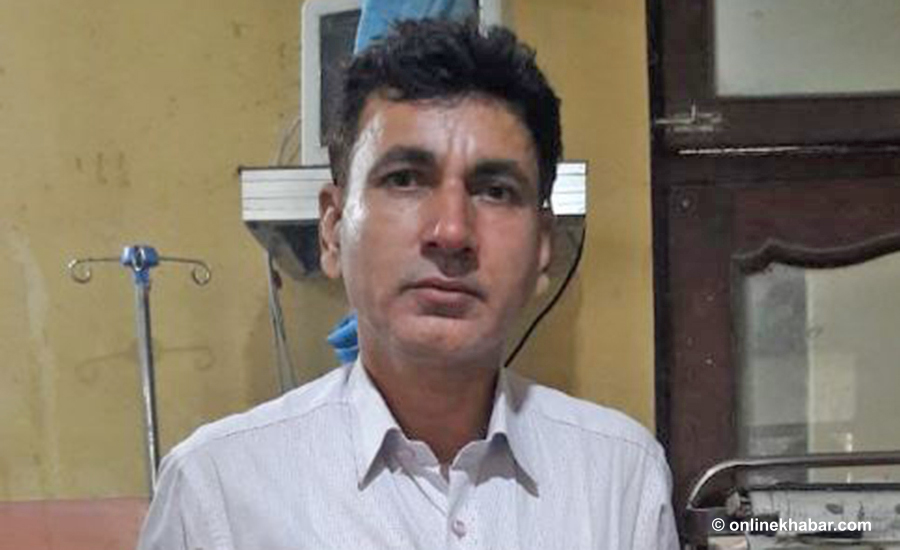 October 10, Birgunj. The headmaster of a school in Prasani village municipality of Bara has accused the ward chairman of beating him. Pawan Singh, principal of Nepal National Higher Secondary School, Belahiya, Prasani-6, has claimed that he was beaten by ward chairman Vrij Kishor Kushwaha.

Ward Chairman Kushwaha has claimed that he was detained and beaten in the office. He said that he returned to Narayani Hospital in Birgunj after receiving treatment. According to sources, the relationship between Kushwaha and Singh had not been good for two years.

He said that the ward chairman Kushwaha came to the meeting on September 26 and asked everyone to come out. After that, 5-6 youths came and beat him directly, said Singh. He said that his mobile phone was also snatched in the process. He said that he went to the hospital after he started bleeding from his nose due to the beating.

The doctor said that the bone of the nose was broken, blood was clotted in the left ear and the mesh was broken. Singh said that he had not been able to lodge a written complaint despite verbally informing the police about the incident.

The teachers of the school have issued a statement demanding action against the culprits.

Meanwhile, police said that no complaint has been lodged about the incident. Spokesperson of the District Police Office, Bara, Deputy Superintendent of Police Gautam Mishra said, “I got the information after receiving a call from the media. What happened?” How is it Who is injured? No one from the so-called victim side has given any information, I have sent a team to understand. ‘

Ward Chairman Kushwaha, on the other hand, said that the allegation that he had beaten up Singh was false. He claims that he went to the school the day before after receiving information that the headmaster had not gone to the school and the teachers had not taught him.

“I went to find out what happened after the school closed in the afternoon. The study was closed for two days, the teacher has not been paid even in tens of days, ‘he said. The students were returning home. Why do you do this to a teacher? You get paid sooner or later. I want you to teach me. ‘ He claimed that the headmaster was beaten by the students and that he calmed the students down.

He is accused of not attending school regularly and embezzling Rs 2 million.