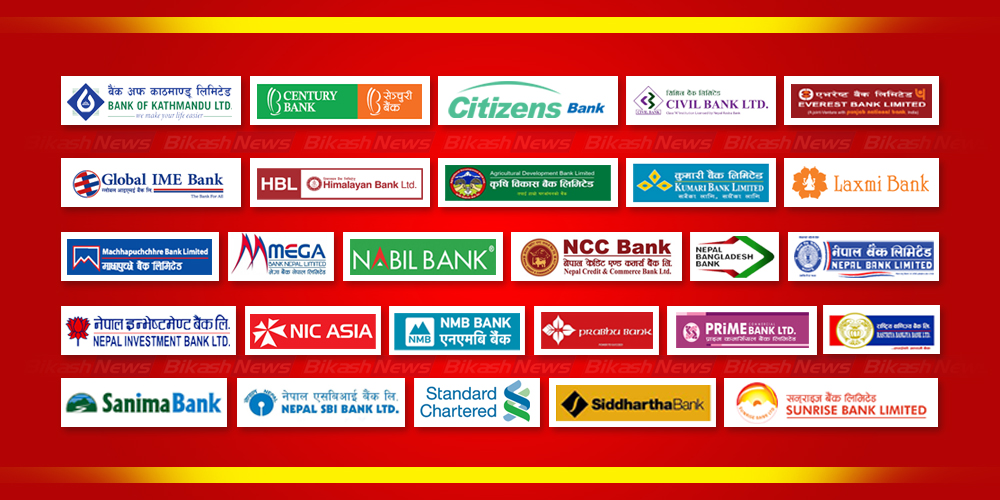 Kathmandu. Last fiscal year, only 27 commercial banks paid income tax of Rs 27.59 billion to the government. The government received the same amount of revenue by paying income tax at the rate of 30 percent of the profit made by the banks.

However, even though the banks have made a distributable profit of Rs. 47.34 billion, all this amount cannot be distributed to the shareholders. Because when distributing dividends from the profits of companies, the government has to pay 5 percent dividend tax again. By distributing all the amount from the distributable profit made by the banks to the shareholders, the government raises additional revenue of Rs 2.36 billion from dividend tax.

Banks are preparing to hold annual general meetings. Some banks have already done so. At present, some banks are announcing last year’s dividend. Therefore, it is not clear how much the banks will distribute as dividend in the current fiscal year.

But, a clear calculation has come. That is, the banks will not distribute cash dividends in the current financial year. Most of the banks that have declared dividends have given high priority to bonus shares. Mega Bank, which offered dividend only yesterday, announced to give 12 percent bonus share. Even if the bank does not announce a single penny of cash dividend, it is clear how the banks are distributing dividends.

Monetary policy has also provided that banks can lend only up to 90 percent of their deposits. Until the last financial year, banks could lend up to 80 percent of their capital and deposits. However, from now on, capital has no meaning for the purpose of lending. If there is a deposit, it is possible to give a loan, if not, it is not available.

However, the dividend distribution arrangements made by NRB through monetary policy played a role in increasing the capital of banks. Because distributing bonus shares in the form of dividends is to increase capital. It has also been alleged that the NRB has played a supportive role in aggravating the problem of maintaining the CD ratio by not allowing banks to increase their capital only from the amount of profit and calculating such capital for the purpose of credit flow.

This may have been done because the NRB felt that the banking sector would be strong and capable if there were more banks with more capital. The NRB may have conducted the necessary study to make this seem, and such a study may have confirmed that strong, efficient and effective banking sector means that the banks have a lot of capital. However, NRB has not made any such study public.

If the banks had distributed cash dividends of Rs 44.58 billion (after deducting income tax and dividend tax taken by the government), it would have been almost certain that the amount from the dividends would have been added to the current deposits. With today’s CD ratio problem, deposits of Rs 44.58 billion would have increased and banks could have lent an additional Rs 40.13 billion. Because up to 90 percent of the deposits with banks can be lent.

If the banks had paid cash in the form of dividends when they could not lend, the investors would have had Rs 44.58 billion. By investing such amount in various sectors, enterprise business would be run, employment would be created and economy would be running.

Banks also showed little interest in not distributing cash dividends up to the limit given by NRB. They may have thought that if we distribute cash dividends, the money will go to the account of the person, the person will withdraw the money and take it elsewhere, even if it is kept in the bank, the banks may not be ready to distribute the cash dividend due to fear. The NRB, which should have reminded the banks that the panic in their minds is just a matter of heart, seems to have shied away from its responsibility.

Banks had made a net profit of Rs 63.37 billion last year despite paying income tax of Rs 27.59 billion to the government last year. Even with such a net profit, the banks could only distribute dividends of Rs 47.34 billion to the shareholders. Even after paying a dividend of Rs 2.36 billion in such amount, the shareholders have received only a scrap of paper in the name of bonus shares.

The bonus earned by the shareholders when the banks earned around Rs 30 billion in taxes to the government last year and more than Rs 10 million to the chief executive officers is just a piece of paper called share. However, in a market like ours where there are a large number of investors who are unhappy with the bonus share and happy with the cash dividend, those who interpret the opposite policy are likely to be reprimanded.