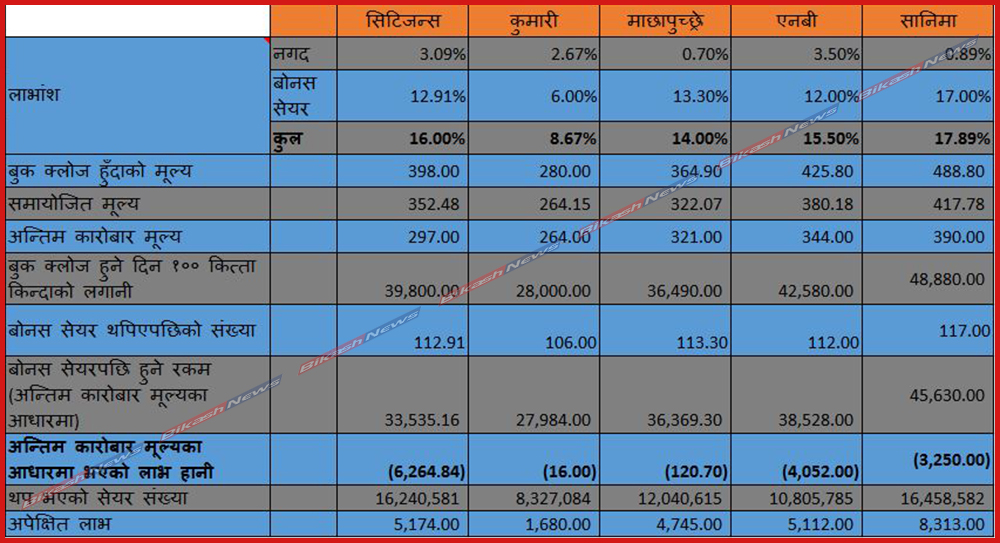 Kathmandu. Of the 27 commercial banks in operation, five have declared dividends and closed their books. Closing the book also means that the dividend declared by the listed company has been secured. Those who buy shares from the secondary market after the book closes will not get the dividend of that year.

Among the banks that have been book closed so far are Citizens Bank International, Kumari, Machhapuchhre, Nepal Bangladesh (NB) and Sanima Bank.

Attempts have been made here to analyze whether the bonus shares provided by these five banks have benefited the investors who bought the shares before the last day of book-closing. For this, it is analyzed whether the profit was made on the basis of the final transaction price after adjusting the price by providing the final price and bonus shares traded in the secondary market before the book closing of the bank.

Let’s start its analysis from Citizens Bank. In order to secure the 12.91 percent bonus share offered by Citizens Bank, an investor has bought 100 shares on the last day of book closing and paid Rs. 398 per share. He has to invest Rs 39,800 to buy 100 units at the rate of Rs 398 per unit.

After the citizens offered 12.91 percent bonus shares, the Nepal Stock Exchange (Nepse) fixed the share price of the bank at Rs 352.48 per share. The share price of the bank has been fixed at Rs 297 per share. However, the investor now owns 112.91 shares. Looking at it this way, according to the current market price, the property of the investor who bought 100 lots of shares by investing Rs. 39,800 can only be seen at an average of Rs. This means that the initial investment has lost more than 6,200 rupees.

If the investor who buys 100 lots of shares at the price before the book close had the property after the bonus share at Rs 398 per share, he would have gained an average of Rs 5,100. But, now the reality of the market does not show that. Due to the 12.91 percent bonus shares provided by Citizens Bank, the number of shares of the bank has increased by more than 16.24 million. Increasing the supply of shares of a company also means lower share price.

Investors who bought shares of Kumari Bank, another bank that has already closed its books, are not at a loss. He bought the pre-book closing price at Rs 280 per share, got a 6 per cent bonus share and lost only Rs 16 as the last trading price was Rs 264 per share. However, before the book close, if someone had estimated that I would make a profit of Rs.

Another bank that has been book-closed after the dividend announcement is Nepal Bangladesh (NB) Bank. The bank closed at Rs 425.80 per share. Investors who bought 100 shares at that price got 12 percent bonus share provided by the bank. However, after the bonus share price adjustment, the bank’s share price stood at Rs 380.18 per share. At present, the share price of NB Bank is Rs 344 per share in the secondary market. According to the current price, the property of the investor who bought 100 shares at the book close price of the bank has now decreased by about Rs 4,000.

It is seen that those who bought shares of Sanima Bank, another bank that gives bonus shares, have also reduced their assets. This is because if an investor buys 100 shares at the price of Rs. The bank’s share price was adjusted to Rs 417.78 after the bonus shares provided by Sanima Bank. At present, the share price of Sanima Bank is Rs 390 per share in the secondary market, while investors who bought 100 shares before the book close now have 117 shares.

Looking at the current secondary market price after the bonus shares of Sanima Bank, the investor will find that his assets have decreased by an average of Rs 3200. If the price had been fixed before the book close, the investor would have found that the assets have increased by more than 8,300 now.